In 1987 Dr. Evans held a Sarah H. Moss Fellowship at the Arnamagnaean Institute in the University of Copenhagen; he was a General Sandy Beaver Teaching Professor from 1997-2000. He was a lecturer in the Franklin College Outreach Program; he is a member of the Environmental Ethics Certificate Program, and director of the UGA Medieval Studies Program.

Dr. Evans, his wife Susan, and their children Owen and Anna reside in Athens, where Anna is a Nurse Practitioner specializing in electrocardiac surgery and critical care and Owen is completing a degree majoring in Arabic language. Their son John David has a B.A. in Economics from UGA and an M.A. in Philosophy and Public Policy from the University of Maryland, College Park.  He is a Division Chief of Inspections in the City of Baltimore, with principal responsibilities in the "Vacants to Value" urban revitalization program. Jonathan & Susan have no dogs, and certainly no cats, although they enjoy dog-sitting Owen and Anna's 3 dogs Finley, Fern, and Watson. They are quiet Presbyterians. Not the dogs, the parents. The dogs are of loud and enthusiastic but indeterminate canine faith-commitments. 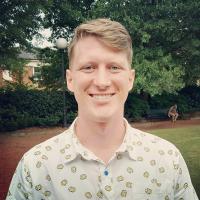